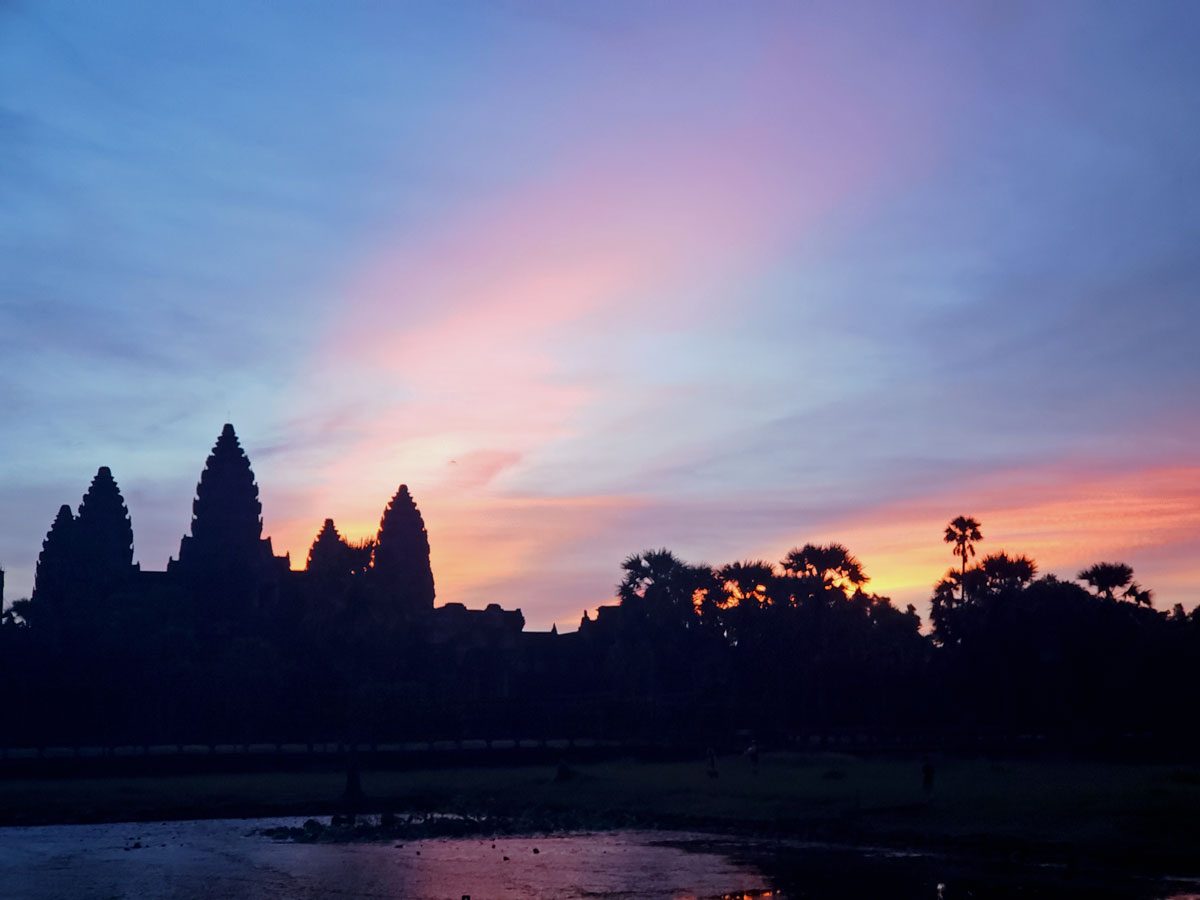 The Khmers that built Angkor in the 12th century 1130-1160 AD where Hindu and they dedicated the temple mainly to Vishnu. They were led by King Suryavarman II. When Angkor was converted to a Buddhist temple at the end of the 12th century, the Wat was added to the name. Angkor was built to be the capital city of the Khmer empire, but scholars have long thought that it was also meant to be the final resting place and tomb of King Suryavarman II.

Angkor was built to symbolize the universe according to the way the Hindu Khmer saw it. The moat represents the oceans around the world. The galleries are the mountain ranges around the divine Hindi Mount Meru, the golden mountain – home to the Gods. Mount Meru itself is represented by the five central Angkor towers. There are carvings on walls all around Angkor showing the God Vishnu and other Hindi Gods. The theory that Angkor was also built to serve as the tomb for King Suryavarman II after his death, has now been generally accepted.

Angkor Wat is the worlds largest religious monument and it occupies some 162.6 hectares in Siem Reap district of Cambodia. One hectare is a square with sides that are 100 meters (this is about the size of a European football field). The area that Angkor Was occupies would hold about 162 European sized football fields.

The serpent in Hindu religion represents the struggle between good and bad as told in the Hindu story of creation; “The churning of the sea of milk”. In the center is Vishnu, on one side are the demons of the underworld, and on the other side are the celestial gods – the sides are both pulling the serpent Vasuki in their direction.

An Apsara is a spirit of the clouds and waters in Hindu and Buddhist cultures. There are two different types of apsaras, worldly and divine. English translations of the word includes, nymph, fairy, celestial nymph and celestial fairy.

In Cambodian tradition Apsaras are either dancing or poised to dance. If the female figure is standing still and facing forward as a guardian or custodian of the temple, they are called devatas.

The sandstone used to build the temples at Angkor was quarried up on the Kulen mountain, around 40 km+ from Angkor and floated on the Siem Reap river during part of the route.

Even though wages in Cambodia are low with Western standards, don’t expect a visit to Angkor Wat to reflect that. The concession to sell tickets etc. is held by a private company and they charge whatever the market can bear. Currently in the fall of 2019 prices were $37 USD for a single day ticket, 3 days (there are no 2 day tickets) are $62 USD and a 7 day pass will set you back $72 USD. Here is a link to the official ticket site with current information. You can also pay in the local currency Riel (KHR) but US Dollars are widely accepted and sometimes preferred in Cambodia. You will also need a driver and, to get the most out of your visit, a guide to help you sort out where to go and what to see. The prices for this varies, but don’t be surprised when a guide and driver with A/C vehicle can cost you around $130 for the day. Cambodia is a great country to visit and Siem Reap and Angkor is one of the most interesting places in the world, but it is hard, not impossible though, to do well on a small budget.

Angkor is not just Angkor Wat, although this is the main temple in the whole complex. It has many other temples that are spread out around the area. The one furthest away from main temple area, Banteay Srey (sometimes Banteay Srei), is located some 25km away from the main group of temples that were once the medieval capitals of Yasodharapura and Angkor Thom. Banteay Srei means “citadel of beauty” or “citadel of the women”. This could be related to the more diminutive scale of the buildings and to the fact that it is intricately decorated with carvings, even more so than many of the buildings in he main temple area of Angkor Wat. The fact that Banteay Srei was constructed out of read sandstone which is easier to carve than other types of sandstone and therefore has more intricate carvings may also be part of why it was named Banteay Srei.